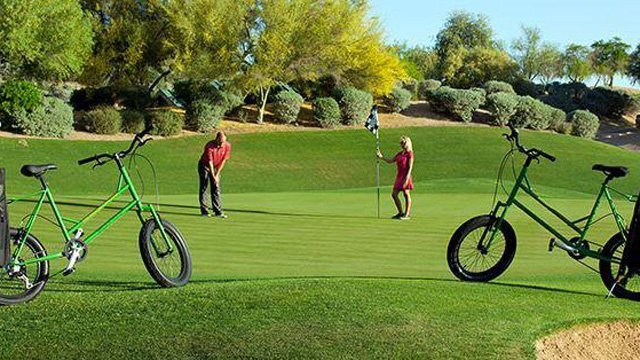 SCOTTSDALE, Ariz. — The Westin Kierland Resort has a reputation for offering out of the ordinary: Air conditioning on the golf carts, bagpipes at sunset, virtual surfing (Flowrider), the best Scotch whiskey collection in the Southwest and Segways as an option instead of golf carts for players who like a little adventure with their golf.

Segways, of course, aren’t for everybody, but the Westin Kierland Golf Club didn’t stop there. Having seen the new Golf Bikes (www.thegolfbike.com) at the PGA Merchandise Show recently, the resort ordered up a couple of foursomes. By late April, they had two with more on the way.

My inspiration for The Golf Bike was to combine two of my favorite passions: golf and cycling. In recent years I found it difficult to make the time to experience both activities on a regular basis. With The Golf Bike, I have combined the benefits of each, bringing the elements of fun, fitness and speed of play to the greatest game ever played.